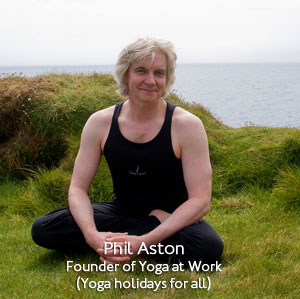 I did not take to yoga easily, in fact after my first class my intention was not to go again!

Following a visit to a well-man clinic I was told I had very high blood pressure and that medication was the best course of action. It was my wife Sue who suggested Yoga might help me.
Apart from the blood pressure issue, I also had painful knees, a back that went into spasm at will and a tendency for panic attacks.

Sue was very determined that I should try yoga again so I did eventually sign up for a full term.
I needed some way of measuring whether yoga worked or not, with my competitive nature in full flow I decided that being able to touch my toes would be my measure. I chose this as touching my toes was something I had never been able to do.

During that first term I struggled to touch my toes, trying very hard each week. Then after week six, I stopped trying and my hands softly landed next to my feet. I had learned the connection between the breath, mind and body.

As the months passed by I became more and more interested in yoga, trying different schools of yoga and immersing myself in personal practice. During this time my blood pressure dropped back to normal and the pain in my knees subsided as did the pain in my back. I also began to recognise the triggers that caused my panic and anxiety and was able to apply yoga to help in this area.

I was always consciously aware that there are very few men in the classes I went to and realising how beneficial yoga was to me, I decided to train to become a yoga teacher hoping this would encourage more men to try it.
I also remembered all the things that had nearly put me off trying yoga and wanted to encourage more people to try yoga and help them realise how yoga can help on a practical level.

I trained with the British Wheel of Yoga initially where I gained my teaching diploma. I use yoga in every aspect of my life from my physical to mental well being.